Template:Issue infobox Court of Love is the 13th issue of the Charmed Comics: Season 10 published by Zenescope Entertainment.

Template:Plot Section Phoebe and Coop stand before the Court of Love, awaiting judgment for Coop's actions. Piper and Leo approach the Elders for help with the Prue dilemma. Paige and Henry find themselves contemplating a future apart. Ben and Kyra join together to help Prue descend into the Demonic Wasteland for answers.

Yeah, none of this is going to go well. 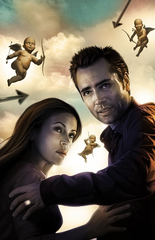